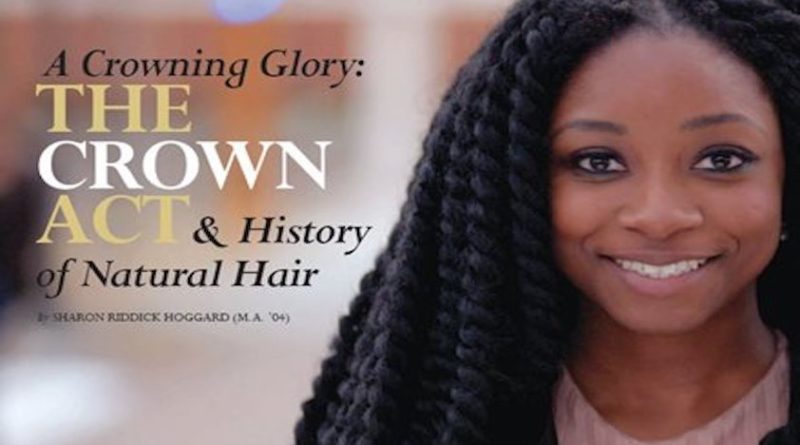 Graham Central Station, the ’70s funk band, said it best in their cut titled Hair. “Black or blonde or nappy or fair. You can’t judge nobody by hair.” Logical, right? Depends on who you ask. Comedian Paul Moody said, in one of the most famous lines in the Chris Rock movie Good Hair, “If your hair is relaxed, they are relaxed. If your hair is nappy, they are not happy.” The dialogue refers to chemically altered and natural hair.

Discrimination based on hair texture is a form of social injustice that has plagued Africans and African Americans around the world for centuries. In the western world in particular, “afro-textured” hair has been treated with disdain from all ethnicities. Upon arrival to North America, black slaves’ hair was cut supposedly to prevent the spread of lice, but it was also an effort to erase part of their culture. “Hair is a very personal identifying characteristic. It is also linked to how in the U.S. we identify, categorize, classify and judge folks (positively and negatively). Therefore, hair that is not like the dominant society (those who hold power) is categorized as other,” said Dr. Khadijah O. Miller, professor of interdisciplinary studies and chair of the Department of History and Interdisciplinary Studies at Norfolk State University.

Miller notes that hair became a symbol against the status quo during the women’s and Black power movements. “But Black hair discrimination is a relevant (yet sad) news discussant because it is another tool used to discriminate against a group of people. When one says your hair, the hair you were born with, and an identifying aspect to the core of who you are . . . is inappropriate, it also states that you are inappropriate.”

In an effort to blend into American society, Blacks have been using hot combs or chemicals to straighten their hair for decades. What has changed is that politically, we have more and more people in positions of power who are embracing cultural differences as different and not wrong.”

Enter the CROWN Act (Create a Respectful and Open World for Natural Hair), legislation that ensures protection against discrimination based on hairstyles, extending statutory protection to hair texture and protective styles in the Fair Employment and Housing Act and state education codes. Six states — California, Colorado, New Jersey, New York, Virginia and Washington — have ratified the act. The legislation movement was birthed by the CROWN Coalition, a group of businesses and other organizations that have dedicated themselves to the advancement of anti-discrimination across the United States.

Virginia Governor Ralph Northam signed the bill, which expands the Virginia Human Rights Act’s definition of racial discrimination, into law in March. The new law provides that the terms “because of race” and “on the basis of race” and similar terms, when used in reference to discrimination in the Code of Virginia and acts of the General Assembly, include traits historically associated with race, including hair texture, hair type and protective hairstyles such as braids, locks and twists.

“If we send children home from school because their hair looks a certain way or otherwise ban certain hairstyles associated with a particular race —that’s discrimination, it’s unacceptable and wrong. This bill makes Virginia more equitable and welcoming to all,” Governor Northam said about signing the bill.

Will the legislation change attitudes about Black hair? “Honestly, I do not know,” reflected Miller. “What I do know is that it is a sad commentary that we have to instill an act for fair treatment in 2020. … Perhaps racial relations have not improved as much as we have hoped. Systematic institutionalized discrimination embedded in American society exists. It adversely impacts African Americans disproportionately compared to white Americans, and Americans of other ethnicities. So with all of that, I do not think it will change attitudes, opinions, and/or beliefs about Black hair, but I do believe it may stimulate more awareness, conversations and a sensitivity to ‘check’ certain beliefs held by African Americans and others regarding Black hair.”

Marquetta Anderson, owner of Naturally U Hair Salon in Suffolk, Virginia, has a down-to-earth approach when it comes to Black hair. “It is vitally important for Black people to wear natural hair,” she said, “one reason being, so many of us are losing hair from chemicals.” The hairdresser and entrepreneur has worn long dreadlocks for many years and has cared for clients wearing natural hair for nearly 30 years, many who have experienced hair loss. Anderson acknowledges that chemically processed hair may have helped African Americans climb the ladder of business success. “Employers want you to present yourself a certain way and natural hair doesn’t fit the mold. You have to look a certain way in the business world. And, natural hair just wasn’t universally accepted. So we straightened our hair to lengthen it and to fit in.”

Anderson believes that the CROWN Act will spark discussion across the races. “Hollywood and television stars are now wearing natural hair.” Because the wealthy and powerful are choosing natural hair, she believes that other states will follow suit and pass their own versions of the CROWN Act. “Some employers and others in the business community will eventually accept natural hair. I applaud everyone who wears their natural hair,” she said, “because we shouldn’t allow anyone to tell us how we should wear our hair.”

One’s race, culture, manner of dress and definitely not the style of one’s hair should ever be a deciding factor in that person’s ability to perform a job effectively, become an elite athlete, graduate from college or attend school.