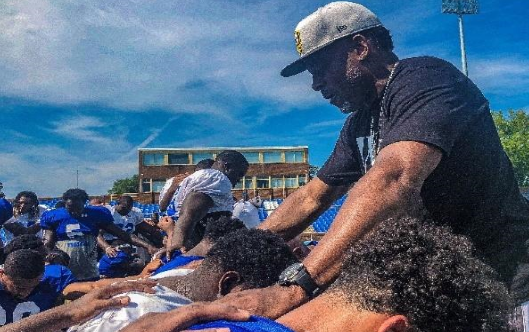 “Lamman Rucker has been a great friend of the university for some time now. We appreciate his support, along with his wife who is a Hampton alumna. We look forward to the success of our football team this season,” said Hampton University President, Dr. William R. Harvey.

Good looks and hard work led Rucker on a career path that started with daytime soap operas (“As the World Turns” and “All My Children”) before landing roles in feature films like Tyler Perry’s “Why Did I Get Married?,” “Why Did I Get Married Too?,” “Meet the Browns” and its television adaptation. Today, he stars in the Oprah Winfrey Network drama, “Greenleaf,” kicking off its fourth season on September 3, 2019.

Rucker provided encouraging words to the Hampton University football team for the kick-off of their second season in the Big South Conference.

The Hampton University football players took a lot away from Rucker’s words. “I learned about being committed, being disciplined and about how to work together as a team. Just hearing these words from a man with so much experience and so much wisdom, and knowing that Lamman Rucker has faith in us, says a lot. We always have faith in ourselves, but listening to those encouraging words from a legend like him helps us have for faith about the season,” said Hampton University Wide Receiver and graduate student, Cortez Lewis.

The Hampton University football team is scheduled to kick-off their season opener on Saturday, August 31st, 2019 at Armstrong Stadium.