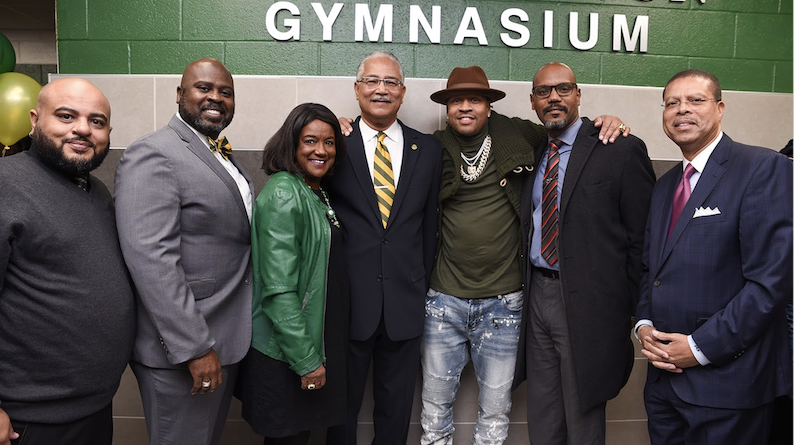 Allen Iverson was ecstatic about Bethel High School in Hampton naming their gymnasium in his honor last month. He could barely hold back the tears of joy. He was happy to be recognized in an area that had such an impact on his life, as he grew up in Hampton Roads, Virginia. The 11-time NBA All-Star never forgot his roots. He has continued to support the school he led to basketball and football state championships.

When Iverson spoke, there was hardly a dry eye around. “We us. We Virginia. We beautiful, man. We the best and we the toughest. We the strongest and we believe in each other. And I just love y’all and this is a great honor, for me,” Iverson told the crowd. Other speakers included Hampton Mayor Donnie Tuck and Hampton School Board Chairwoman, Ann Stephens Cherry.

Bethel High School’s Athletic Director, Lee Martin appreciates the time and attention Iverson has given back to the school. “Although our current students may have never seen him play [in person], Iverson is an icon throughout the world. He constantly visits when he’s in town and lets our students know that he ‘is’ them, and vice versa. Seeing a Hall of Famer in person that you can actually touch, take pictures with, etc shows them that [that] it’s not a fairly tale. It is reality and if he can become successful at that level, so can they,” Martin wrote in a statement to the Messenger.

Throughout his retirement from the NBA, Iverson has remained a pop culture icon. He is loved by people all over the world. If he did not know it before, he should realize now how treasured he is in Hampton Roads. In a statement prepared for the Hampton Roads Messenger, Iverson said: “I am forever grateful to the City of Hampton, Hampton City Schools as well as Mr. Ralph Saunders and all the people from Bethel High.  Tuesday, December 3, 2019 will be a day that I will never forget. It will stand as one of our greatest accomplishments that I share with so many from our community. Just to see my name on the gymnasium that I did my thing in is something that I never imagined. Thanks for giving me my flowers while I can still smell them”.