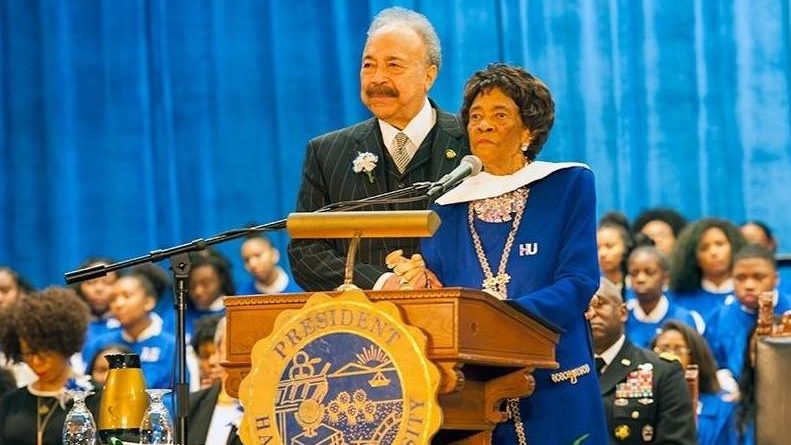 Dr. Mary Taylor Christian, born August 9, 1924 in Hampton, Virginia, died on Monday, November 11, 2019. Dr. Christian’s death leaves her family and community void of her leadership, kindness, and wisdom. She has been described as a humble servant by constituents and students; a great delegate, mentor, teacher, leader, and humanitarian. A determined woman of great strength and loving kindness to anyone needing a helping hand, she never wavered in her pursuit of education for all.

Dr. Christian propelled herself from employment in the laundry at Hampton Institute (now Hampton University) to secretary, and ultimately to the position as Hampton’s Dean of the School of Education in 1980. Dr. Christian maintained her visibility in the community and was affectionately called Dr. C. by her students at Hampton University.  Her parents were a homemaker and businessman; she grew up in a home of five siblings with little money, however her parents instilled in her the necessity for a good education.

She graduated from Phenix High School in Hampton in 1941; received her Bachelor of Science in Education, Hampton Institute, 1955; M.A. in Speech and Drama, 1960, Columbia University; and Ph.D., Michigan State University, 1967 according to the Barrett-Peake Foundation website.

In all her endeavors, Dr. C. maintained a sense of community. As part of that work, she founded the Barrett-Peake Heritage Foundation in 2013 “whose mission is to preserve African American Heritage, to upgrade and secure signage for historic cemeteries,” according to the foundation website. Dr. Christian’s advocacy and activism did not slow down as she aged, thus displayed by her community service, when in May “she helped organize a cleanup of an historic African American cemetery in downtown Hampton, “according to the Daily Press (Newport News, Va.)

Dr. Christian began her lengthy career in academia as a teacher at Aberdeen Elementary School with Hampton City Schools from 1955-1960, then ultimately became the Dean of Education at Hampton University until her retirement. Her decision to delve into local politics was successful as she ran for and won a seat on the Hampton City School Board of Education in 1973. She has been touted as the first African American woman to serve on the board.

A proponent of education for all, including students with disabilities and the underserved, Dr. Christian entered the state political arena, and in 1985, ran for a Virginia House of Delegates seat and won. “She was the first African American female since reconstruction to win a delegate seat and represented the 92nd district, city of Hampton for nine terms—from 1986-2004,” according to her foundation website.

One of her longtime friends, W. Ross Boone of Suffolk, Virginia, described Dr. Christian like this– “Dr. C., Mary, Mrs. Christian was a beautiful human being.” During our telephone interview her friend, colleague, and coworker, Mr. Boone said, “she was an unforgettable person, someone you would never forget.”  He first met Dr. Christian at Hampton Institute around

1968 and remained a friend for more than 50 years. Dr. Christian was his boss and he worked with her for more than 10 years, but felt more like a part of her family instead. He explained that part of her personality was to “embrace everybody, no matter what their condition; she was an amazing person and never lost sight of a way to help someone.” Toward the end of our conversation, Mr. Boone said that everything that I had read or heard about her was true, “she was a dynamic personality. She was a servant for, and to the people. I thank God for bringing her into my life.”

As a testament of Dr. Christian’s diligence for her causes, Virginia Delegate Jeion Ward, current 92nd district delegate, issued the following statement upon learning of her death: “She was my predecessor, my Soror, and my friend. Dr. Mary T. Christian was the epitome of a phenomenal woman. Her incredible work, not only in the House of Delegates but as a humanitarian touched many lives….”

Her tenacity, focus on education, and political acumen reached to the heights of federal government as well. In a press release, Virginia U.S. Senator Tim Kaine said, “there was no greater champion for education than Delegate Mary Christian. While we are saddened by her passing, we can celebrate the amazing life Dr. C. lived and her tireless advocacy on behalf of her constituents and students.”

The Hampton University family were recipients of Dr. Christian’s longtime activism for her students and alma mater. Hampton University President, Dr. William R. Harvey said, “Dr. Christian has always been an outstanding lady, colleague, academician, administrator, leader, alumna, legislator and friend. She was loyal and supportive of Hampton University, her alma mater, up until the very end.”  Dr. Harvey continued his remarks by saying he “will personally miss this kind-hearted, effective and productive lady.”

Among the plethora of honors and accolades Dr. Christian earned and received during her lifetime are the following: Naming of the Dr. Mary T. Christian Auditorium and Theatre, dedicated in 2003, on the Thomas Nelson Community College, Hampton Campus; Resolution of Hampton City Council, December 13, 2006; and establishment of the Dr. Mary T. Christian Scholarship Fund at Hampton University. Dr. Christian was a member of Delta Sigma Theta Sorority, Inc.  A pillar of the community is how many residents of Virginia have defined her public service; she leaves a vacuum in the community.

Dr. Christian leaves to mourn her passing, her husband, Wilbur Bernard Christian, two daughters and a sister. At press time, a funeral service was tentatively scheduled at the Hampton University Convocation Center for Monday, November 18, 2019.