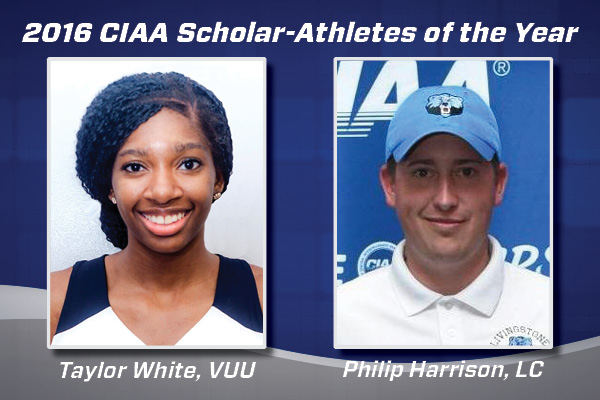 The Scholar-Athlete of the Year is awarded to the most outstanding and well-rounded male and female student-athlete in terms of their athletic, academic, and community performances.  On the basketball court, Taylor White recorded an average of 10.1 rebounds and 9 points per game.  She totaled 11 double-doubles, blocked 26 shots, and was named to the 2016 All-CIAA Women’s Basketball Team.  In her best contest this season, the 4.0 Dean’s List education major grabbed 20 rebounds while scoring 21 points versus Rollins College.

Playing a major role in her community, the White served as an essay judge for the Lucille M. Brown Community Youth Bowl, participated in the Teddy Bear Christmas Drive, and has volunteered more than 60 hours at the Overby-Shepheard Elementary School in Richmond.  In addition to serving as a linguistics tutor, the senior standout led her team in community initiatives during the Elite Eight Tournament.

Philip Harrison, Male Scholar-Athlete of the Year, is a 4.0 business administration golf student-athlete. With the highest GPA on the golf team, the sophomore won low medalist in the CIAA Golf Championship Tournament and advanced as an individual to the NCAA Super Region Golf Tournament.  Harrison and his Livingstone team placed second in the conference championship and won the Black College Hall of Fame tournament.

Outside of hours spent on the course, Harrison volunteers his time to feed the less fortunate, mentor young athletes of the junior golf camp, and also spends time with the Special Olympics.

The Central Intercollegiate Athletic Association (CIAA) was founded in 1912 and is the oldest African-American athletic conference in the nation. Although the membership has changed since 1912, the CIAA consists of Historically Black Colleges and Universities (HBCU) spanning the east coast from Pennsylvania to North Carolina.