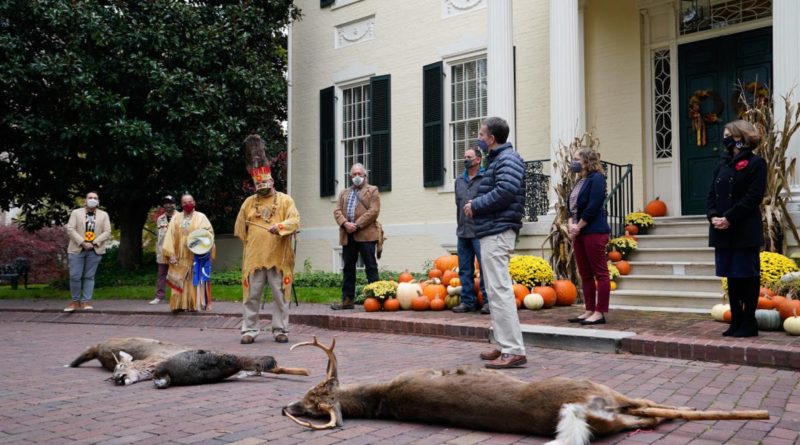 RICHMOND—Governor Ralph Northam today hosted a small delegation from the Mattaponi Indian Tribe and the Pamunkey Indian Tribe at the Executive Mansion in Richmond for the 343rd annual Indian tax tribute ceremony. This follows a proclamation issued by the Governor earlier this month designating November as Native American Heritage Month in the Commonwealth of Virginia. The Indian tax tribute ceremony dates back to 1677 with the signing of the Treaty of Middle Plantation between a group of tribes and the Virginia Corporation—the predecessor to the Commonwealth of Virginia—establishing the first reservations in the United States. Each year, the chiefs of the Mattaponi and Pamunkey tribes honor the spirit of the treaty with a symbolic tax of wild game and hand-crafted gifts presented to the Governor of Virginia in return for continued possession of their tribal lands. The ceremony is the oldest continuing nation-to-nation ceremony in the country. While song and dance are a central component of the annual event, this year’s ceremony did not include these traditions to protect the health and safety of all participants amid the pandemic. Photos from this year’s ceremony can be found below. “Virginia’s native people enrich our Commonwealth with their vibrant heritage, traditions, and continuing contributions,” said Governor Northam. “Native American Heritage Month is a celebration of the resilience of our tribal communities, and an opportunity to reflect on how we can better address the unique challenges they face and recommit to cultivating strong government-to-government relations with Virginia’s Indian tribes. Even during these difficult and uncertain times, let us remember that our diverse backgrounds only strengthen the Commonwealth we love.” Governor Northam also released a video message to mark Native American Heritage Month in Virginia, in which he highlights a portrait from the Virginia Museum of Fine Arts that was unveiled in the Executive Mansion in 2019 depicting former Chief of the Pamunkey Walter Bradby wearing traditional regalia. The work is by Ethan Bro wn, one of his descendants. “Virginia Indians are an integral part of our past, present, and future,” said Secretary of the Commonwealth Kelly Thomasson. “We are committed to working with Virginia’s Indian tribes to protect the health and vitality of these communities and ensure that Virginia remains an inclusive place for all who call the Commonwealth home.” Virginia is home to 11 state-recognized Indian tribes, which include the Cheroenhaka (Nottoway) Indian Tribe, Chickahominy Indian Tribe, Chickahominy Indians Eastern Division, Mattaponi Indian Tribe, Monacan Indian Nation, Nansemond Indian Tribe, Nottoway Indian Tribe of Virginia, Pamunkey Indian Tribe, Patawomeck Indian Tribe of Virginia, Rappahannock Tribe, and the Upper Mattaponi Indian Tribe. Seven of these tribes are federally recognized. In October, Governor Northam designated October 12 Indigenous Peoples’ Day in the Commonwealth, the first such proclamation in Virginia history. And last year, Governor Northam announced a land acquisition by the Chickahominy Tribe and signed a land trust agreement with the Mattaponi Indian Tribe, two significant actions that help to rectify past wrongs when the Commonwealth allowed their reservation land to be encroached upon and ensure the sustainability of Virginia’s Indian tribes for future generations. The Virginia Department of Education has instructional resources on the history of Native Americans in the Commonwealth available here.