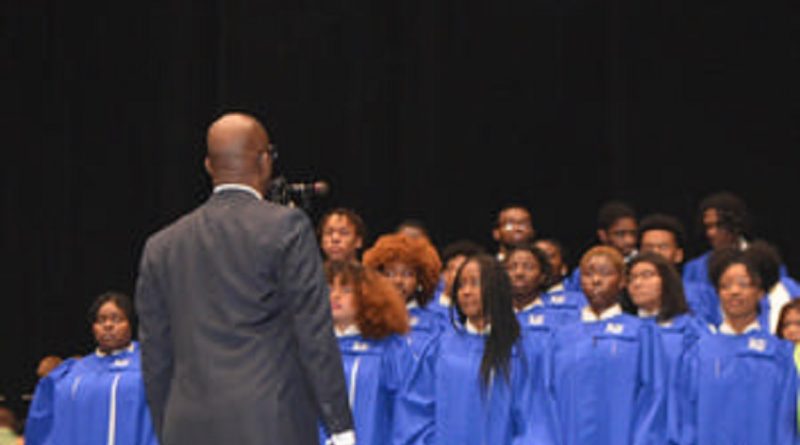 HAMPTON, Va. (November 22, 2019) – Hundreds of members of the Hampton University family, city and state officials, community members, sorority sisters and the family of Dr. Mary T. Christian came together on Monday, November 18 at the Convocation Center to celebrate the life of this extraordinary woman.

Before the main service, Dr. Christian’s sorority sisters from Delta Sigma Theta Sorority, Inc. gave the Omega Omega ceremony for a final tribute to their dear sister. Delegate Jeion A. Ward was pinned by Dr. Christian in 2004. “During her service in the General Assembly, she was known as a champion for education. She was a powerful voice for those who were voiceless. She continues to be known for her thoughtfulness and for her voice of reason. She was beautiful. She was elegant. She was classy. She truly was a phenomenal woman,” said Delegate Ward.

The Celebration of Life was presided over by Reverend Dr. Richard W. Wills, Sr. from Friendship Baptist Church. Dr. Christian’s grandson, Alan Smith, II, read a scripture from the Old Testament. The Hampton University Concert Choir provided a beautiful and moving musical selection and then several members of the community were able to speak on Dr. Christian, including Hampton University’s President, Dr. William R. Harvey.

“It was with a great deal of sadness that my wife, Norma and I, learned of the passing of Dr. Mary T. Christian. On behalf of the entire Hampton University family, I extend our deepest sympathies to her husband Mr. Wilbur, her daughters, grandchildren, great-grandchildren and other family members. As sad as this occasion is, it is also a great time of joy and celebration. She was the type of person and professional that we should all strive to be. She demonstrated the values of decency, dignity, integrity, responsibility, unity, and civility. We do not have a lot of those characteristics today, especially in our political practices. There is no question about the fact that Dr. ‘C’ improved the lives of so many of us,” said Dr. Harvey. “She was a talented and unassuming individual. She was fun to be around and a joy to behold, and I loved the wonderful spirit of this mighty oak.”

Dr. Harvey also spoke of her leadership during her time as the very first Dean of the Hampton University School of Education, where the school flourished under her direction. Dr. Christian also led the taskforce to transition Hampton Institute to a research university, known as Hampton University today.

Hampton University alumna, Morgan Avery McCoy and her family have known Dr. Christian for many years. She read an original poem entitled “Queen of Hampton,” in honor of Dr. Christian’s life legacies.

“From laundress to secretary to teacher to dean, you Queen did something many had never seen. Loving wife, sister, grandma and auntie, also known as Ma Bootsie. A true matriarch, you gave your family life all while helping those in the community to overcome their strife. Queen. Called to politics because the people needed you. And you did what any good Queen would do, you answered the call. Even though some might have thought you would fall, you stood tall, and outlasted them all. Queen. Dream pusher, singer, teacher, actress, grammar police and a copy editor too, many in here had her proofread a paper or two. Queen. With every last breath you continued to fight. To fight for your city and for those you love. Now we know you’ll be fighting from above. Queen.”

Many individuals, political figures, friends, and family had the chance to speak about Dr. Christian and share their fond memories.

“She had a relationship with the Lord Jesus Christ. She was a living epistle that nothing was impossible with God when we surrender and give all to Him. When I asked my beloved family, what words would they use to describe Ma Bootsie, they said: phenomenal, forgiving, excellent, an inspiration, creative, bodacious, extraordinary, determined and a good mother. Now, let’s take those words and apply them to our own family,” said Cheryl Smith, Dr. Christian’s granddaughter.

Dr. Christian was an educator and politician. She served seven terms in the Virginia General Assembly where she championed legislation on education, healthcare and prescription drugs. Dr. Christian was among three African Americans appointed to the House Appropriations Committee. She also served on the Education and Rules Committees.

Known on campus by her students as “Dr. C.,” she was professor emeritus at Hampton University. She received numerous awards for her community and humanitarian service. In 2014, a play based on Christian’s life was performed on campus as part of her birthday celebration, titled “My Life Did the Singing.” All proceeds from the celebration benefited the scholarship fund established at HU in her name.

Dr. Christian is now laid to rest at the Hampton University Cemetery.