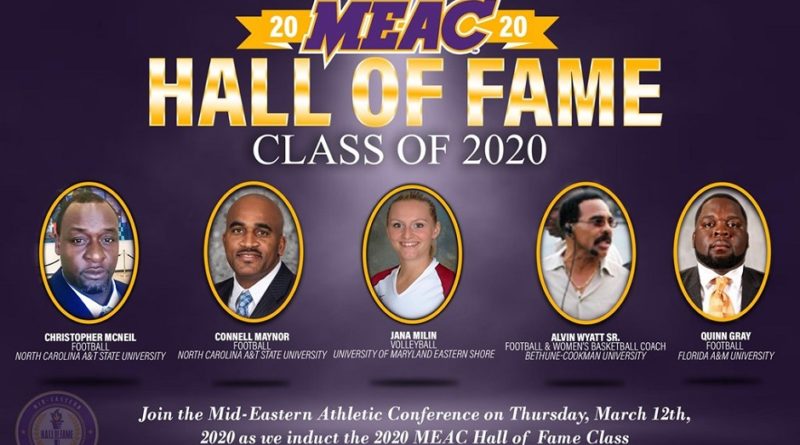 NORFOLK, Va., Nov. 15, 2019—The Mid-Eastern Athletic Conference (MEAC) announced today the five members of its 2020 Hall of Fame Class. The inductees will be enshrined during an awards brunch on Thursday, March 12, starting with a welcome gathering at 9:30 a.m. at the Sheraton Norfolk Waterside Hotel in Norfolk, Va. The Hall of Fame class will also be recognized before the 6 p.m. men’s basketball game during the 2020 MEAC Basketball Tournament on March 12 at the Norfolk Scope Arena.

“I would like to congratulate the 2020 Hall of Fame class for all their accomplishments, both athletically and professionally,” said MEAC Commissioner Dr. Dennis E. Thomas. “The honorees have made significant contributions to their families, communities, institutions, and this conference. They are to be commended.”

The MEAC Hall of Fame highlights former student-athletes, coaches, university and conference administrators, as well as special contributors, who have enriched the legacy of the conference since its inception in 1970. Enshrinees were selected by an 11-person committee made up of administrators and representatives from member institutions.

The inaugural Hall of Fame class was inducted on May 29, 1981 during a 10-year anniversary banquet in Greensboro, N.C. Since its establishment, the MEAC Hall of Fame has enshrined 153 people, including the Class of 2020.
The 2020 MEAC Hall of Fame InducteesQuinn Gray, Florida A&M: Gray flourished in the Gulf Coast offense era under legendary head coach Billy Joe – finishing as the Rattlers’ all-time leader at the time in passing yards (7,378), pass attempts (1,113), completions (562) and touchdown passes (57). He holds three of Florida A&M’s greatest single-game passing performances: 407 yards against South Carolina State in 2001, 390 yards against Morgan State in 2000 and 388 yards against rival Bethune-Cookman in 2000. Leading Florida A&M to back-to-back MEAC titles in 2000 and 2001, Gray reached the NCAA Div. I-AA (now FCS) playoffs all four years – including a run to the national semifinals in 1999. He signed with the Jacksonville Jaguars as a free agent in 2002, and he was the Jaguars’ backup from then to 2007. Gray also played in NFL Europe in 2003, leading the Frankfurt Galaxy to the league championship. A native of Fort Lauderdale, Fla., Gray currently serves as head football coach at Lincoln (Fla.) High School, in addition to being a motivational speaker and director of the annual “Future Legends Foundation” football and cheerleaders camp presented by the American Cancer Society.

Connell Maynor, North Carolina A&T State: The MEAC Offensive Player of the Year in 1990 and 1991, Maynor became the first Aggie to ever win that award. In 1991, he threw 18 touchdown passes in leading North Carolina A&T State to the MEAC championship, and with him under center, the Aggies had back-to-back nine-win seasons. In his career, Maynor accounted for 58 touchdowns (39 passing, 19 rushing), which currently ranks third in program history. His 141.82 career pass efficiency is the best in Aggies history, and he also boasts the program’s highest career completion percentage at .561. Maynor went on to have a 12-year Arena Football League career (winning four AFL championships), in addition to serving as Jamie Foxx’s stand-in for the film Any Given Sunday and also doing stunt work on Remember the Titans. He was a successful head coach at Winston-Salem State before serving in the same position at Hampton University for four years. He is currently the head football coach at Alabama A&M.

Christopher McNeil, North Carolina A&T State: A transfer to North Carolina A&T State from N.C. State, McNeil spent plenty of time in the offensive backfield in 1996. That season, he recorded 17 tackles – 11 of which were for a loss. Of those 11 tackles for loss, nine were sacks. The 1997 season, however, was McNeil’s dominant season. As a defensive end, he had 49 total tackles, 25 for loss, and 21.5 sacks (which is the highest single-season total in MEAC history). McNeil was named MEAC Defensive Player of the Year and First Team All-MEAC for his efforts, and he was also recognized as the Sheridan Broadcasting Network Black College Defensive Player of the Year. McNeil was also named Div. I-AA Player of the Year, Sports Network First Team All-America, NCAA First Team All-America, Associated Press All-America and Walter Camp All-America. He then played professional football for the Hamilton Tiger-Cats of the Canadian Football League, before returning to North Carolina A&T State to complete his degree. McNeil is heavily involved in youth sports through the greater Charlotte, N.C., area, serving as football president for I Got Next Youth Sports, and he is also the Vice President of Football Operations for CSG Wealth Management. To this day, McNeil organizes football camps for current and former NFL players dedicated to giving back to their communities.

Jana Milin, Maryland Eastern Shore: A 2016 inductee into the Maryland Eastern Shore Hall of Fame, Milin was instrumental in turning the Hawks volleyball program into a perennial MEAC contender. She dominated the MEAC, and she currently holds the program record in kills (1,795) and service aces (315). Both totals are also MEAC all-time records. The 2002 MEAC Rookie of the Year and Player of the Year, Milin repeated as Player of the Year in 2003. She was a First Team All-MEAC selection in each of her three seasons in Princess Anne, Md., and she led the conference in both kills and service aces in both 2002 and 2003. A member of the 2003 and 2004 MEAC All-Tournament Teams, Milin was also a force nationally – leading all of NCAA Div. I in aces per set in 2004 (0.94). Two years prior, she had ranked fourth in the nation in that category. Each season also saw her rank in the top 30 nationally in kills. Recognized six times by the American Volleyball Coaches Association (AVCA) for racking up 30 kills in a match (and 12 times for recording a triple-double), Milin was also recognized in 2004 as a CoSIDA Academic All-District First Team honoree.

Alvin Wyatt, Sr., Bethune-Cookman: Wyatt took over as head football coach at his alma mater in 1997, leading the Wildcats to their first-ever Div. I bowl game in 1998 when Bethune-Cookman appeared in the Heritage Bowl. Known for his colorful personality and equally vibrant wardrobe, Wyatt instilled his knowledge of defense in turning the Wildcats into a powerhouse in the MEAC. That led to a conference title in 2002 – the Wildcats’ first outright MEAC crown since 1984 – and back-to-back NCAA Div. I-AA playoff appearances in 2002 and 2003. Among those Wyatt coached during his tenure were future NFL players Rashean Mathis (2017 MEAC Hall of Fame inductee), Nick Collins (2018 MEAC Hall of Fame inductee) and Eric Weems. Wyatt is the all-time winningest coach in Bethune-Cookman football history at 90-54, but he was just as successful as head coach of the women’s basketball program. He led the Lady Wildcats to the 1984 MEAC Tournament championship with a 62-61 overtime win over South Carolina State, and he was named the tournament’s Outstanding Coach. Wyatt served as head coach of the women’s basketball program from 1978-96, going 260-200 to rank as the all-time winningest coach for that program as well.