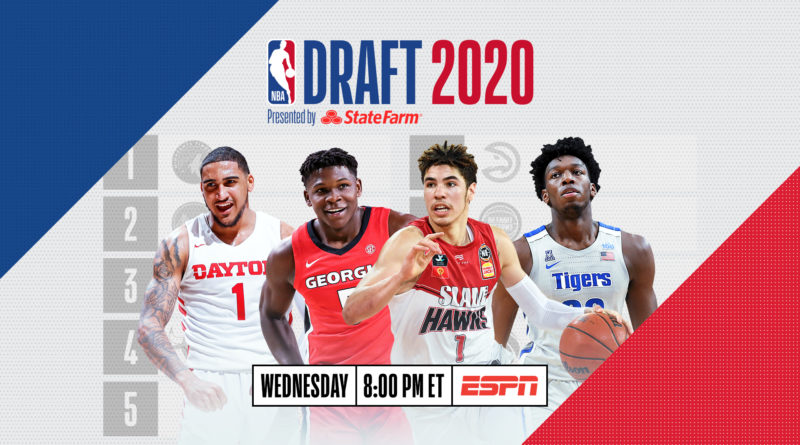 November 18, 2020 – The 2020 NBA Draft will be broadcasted today on ESPN at 4 pm PT and 7 pm ET. This is where 32 teams will make some kids’ dreams come true. The Minnesota Timberwolves have the first chance of doing that. They should go with someone who can complement Karl-Anthony Towns and D’Angelo Russell rather than someone who needs the ball in their hands to be dominant. Otherwise, the offense will run through Towns and Russell. Who can be a great defensive presence, hustle, and get offensive and defensive rebounds? Obi Toppin out of The University of Dayton could be the answer. His gameplay is similar to how Blake Griffin played during his first few years with the Los Angeles Clippers: a high flying, defensive player, who gets rebounds.

The Golden State Warriors hold the second pick in the draft. They currently have two great shooters– two of the best three point shooters in NBA history with Stephen Curry and Klay Thompson. Also, their head coach is a good three point shooter himself. So why not add another good shooter, LaMelo Ball out of Spire Institute and Academy. Ball has handles, can shoot, and has good height, and can play the 1 through 3 positions. He will add to the already strong shooting of the Warriors.

With the third pick, the Charlotte Hornets need everything. They really need a corner piece that will come in and make an immediate impact. Anthony Edwards can be that guy. Coming out of The University of Georgia, where he was the focal point of the offense. He can come in and shoot the ball from deep and be there for clutch moments when needed. He also can play on the defensive side of the ball and create fast breaks and slam it home to get the bench and crowd hyped.

The Chicago Bulls have the fourth pick and need a big man. The perfect big man for them is James Wiseman, who has the size and skill set to be a good piece for the Bulls. Wiseman can play alongside Zach Lavine and Coby White. Lavine and White can get hot quickly or Wiseman can get the rebounds and dominate in the paint. He can also protect the basket on the defensive side. By drafting him, the Bulls can put Wendall Carter Jr. at the power forward position and have Wiseman at the center position.

Lastly, rounding out the top five is the Cleveland Cavaliers. After Lebron James left for the Lakers in 2018, they haven’t had much success. They have a good point guard in Collin Sexton but he needs help. This is where Deni Avijia from Israel comes in handy. He gets his teammates involved, allowing a great passer to have his back to the basket, and he is a good three point shooter, which will come in handy playing in today’s league. He can push the ball in transition and get to the basket or find the open man. IQ is great. Avijia has some qualities like Lebron, including the passing and moving the ball in transition.