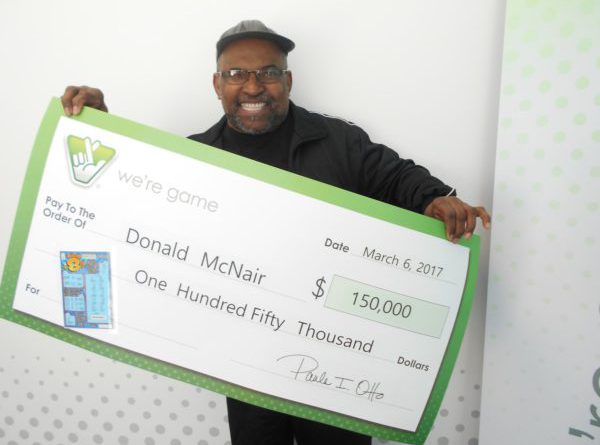 Donald McNair wasn’t sure if the ticket in his hand was actually a winner. The Norfolk man thought he might have won the $150,000 top prize in the Virginia Lottery’s Amazing
8s game.”You know you didn’t win,” his wife told him when he told her.

It turns out the ticket really was a top-prize winner. He bought it at the 7-Eleven at 3112 Azalea Garden Road in Norfolk.

Mr. McNair was the fourth player to claim the $150,000 prize in Amazing 8s (game #1705). Just two days after he claimed, the fifth and final top prize in that game was claimed, which means the game is closed. It’s the Virginia Lottery’s policy to close games once the last top prize is claimed.

Mr. McNair, who is retired, said he has no immediate plans for his winnings, except to help his family and church.

When it comes to education, the Virginia Lottery is game.  In fact, it’s the reason we play.  We generate more than $1.6 million per day for Virginia’s K-12 public schools.  Operating entirely on revenue from the sale of Lottery products, the Virginia Lottery generated more than a half-billion dollars for Virginia’s public schools in Fiscal Year 2016. For more info, visit our website, like us on Facebook follow us on Twitter and Instagram and check us out on YouTube. Please play responsibly.