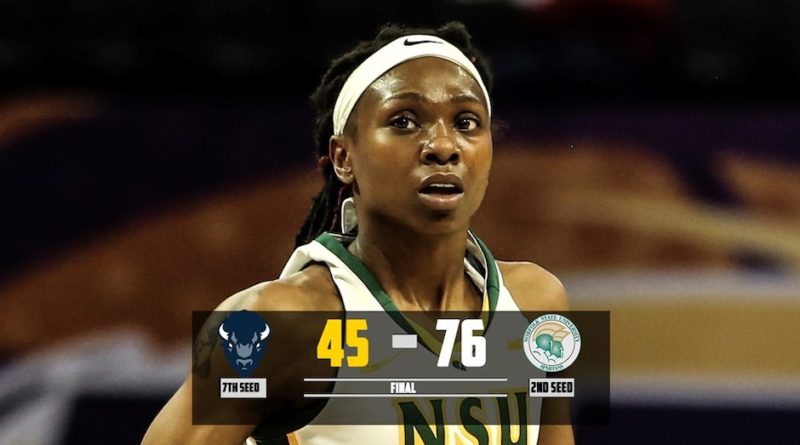 NORFOLK, Va., March 11, 2020—Chanette Hicks led the way with 18 points, and three Spartans scored in double figures as second-seeded Norfolk State upended Howard 76-45 in a quarterfinal match-up at the Score Arena on Wednesday.

The Spartans (19-11) advanced to Friday’s 2 p.m. semifinal, where they will face either Morgan State or Delaware State.

“I feel like this was probably one of the most thorough games we’ve had this season,” Spartans coach Larry Vickers said. “At least in conference.”

Hicks, the MEAC Player of the Year and Defensive Player of the Year, also had nine assists and eight steals. The only thing keeping her from a triple-double was the game being out of reach in the last 10 minutes.

La’Deja James added 14 points for Norfolk State, while De’Janaire Deas came off the bench to chip in 13.

Howard led 5-2 in the opening minutes, but the Spartans scored the next 10 points to take a 12-5 lead. The run continued, and by the end of the first quarter, Norfolk State was on top 24-9.

The lead ballooned even more in the third quarter, as the Spartans jumped out of the gate and outscored the Bison 27-8 in the frame. Hicks scored seven of her 18 points in the quarter, while also dishing out a pair of assists and grabbing two steals.

After three quarters, the Spartans led 66-31.