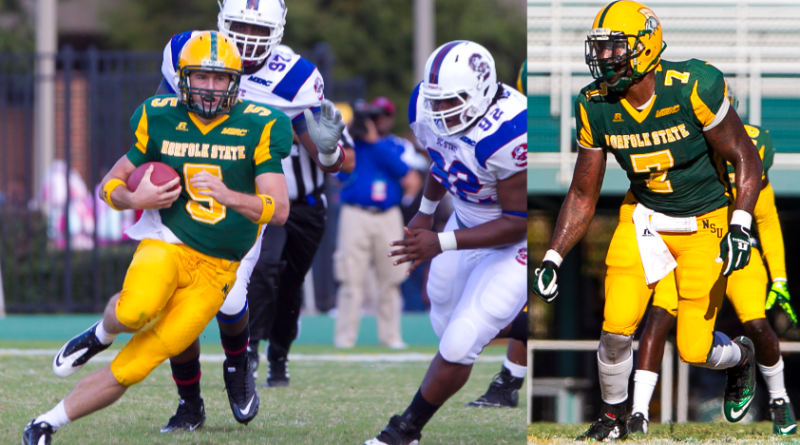 NORFOLK, Va. – When the spring sports season was shut down, it marked the end of a decade of Norfolk State athletics. From the fall of 2010 to the spring of 2020, it was a 10-year stretch that saw countless highlights across NSU’s 15 total sports. Many of those programs’ greatest achievements – since NSU made the jump to NCAA Division I in 1997 – came during this decade.

Over the course of the next few months, we are going to spotlight those storylines right here on NSUSpartans.com. Every week, we’ll choose a different sport(s) and take you down memory lane before we get set to start a new decade of excellence. In addition, head over to our Twitter page (@NSUSpartans) where fans will have the opportunity to vote for what they think is the greatest highlight per sport. At the end, they will also be able to vote for the greatest overall highlight in NSU athletics during the past 10 years.

Up next, we turn our attention to football. We’ve narrowed it down to six storylines from the past decade that we’ll focus on today, in no particular order.

A.) Upsets happen. There’s no way around it. And for the Spartans, they were on the better end of a pair of upsets over ranked MEAC opponents. The first came in 2013 when NSU ended Bethune-Cookman’s 19-game MEAC win streak. At No. 10/12, B-CU became the highest ranked team NSU had ever beaten. The Wildcats went on to share the conference title in 2013 after winning it outright the year before. Then in 2017, another long conference streak came to a close. The Spartans topped No. 25 North Carolina Central, ending the Eagles’ 18-game MEAC and 11-game home win streaks. NCCU had won or shared the MEAC championship each of the previous three years. More remarkable than all that? Both victories came on the road.

B.) NSU had some nasty defenses during the decade, and no player personified that more than linebacker/defensive end Lynden Trail. He was a three-time All-American in his three seasons at NSU after transferring from the University of Florida. That included third-team All-America honors his junior season in 2013 and second-team accolades as a senior in 2014 from the AP. The Sports Network did one better, naming him first-team All-America in 2013. Trail finished as a three-time first-team All-MEAC honoree and a two-time finalist for the Buck Buchanan Award, given to the top defensive player in FCS. He is one of just two players in NSU’s Division I era to earn All-America honors three times.

C.) In 2007, NSU fell in overtime at Delaware State in the last MEAC game of the year, a setback that prevented the Spartans from winning their first-ever MEAC title. Several years later, they got past that disappointment when they claimed the 2011 title outright. Behind MEAC Offensive Player of the Year Chris Walley at quarterback and one of those aforementioned nasty defenses, NSU went 7-1 that season and advanced to the FCS Playoffs for the first time ever. The excitement grew from there as NSU traveled across town to take on ODU in the first round of the playoffs. Although the title, playoff appearance and nine wins were vacated a few years later by the NCAA, at the time it marked the first conference championship since 1984 and one of the biggest moments for the school since moving up to D-I.

D.) Trail was not the only defensive player to make an impact for the Spartans. Deon King played alongside him for three seasons from 2012-14, earning second-team All-MEAC honors in 2013 and first-team accolades in 2014. Then in 2015, King did even more, becoming the program’s first consensus All-American at the FCS (Division I) level. The AP, Walter Camp, STATS, and American Football Coaches Association all named him first-team All-America. He capped his senior season by winning the Buck Buchanan Award, thanks in part to a nation-leading 163 tackles from his linebacker spot. King went on to appear in 15 games in the NFL, the last Spartan player to make an appearance at the highest level of the sport.

E.) He may have played just one season within the decade, but DeAngelo Branche made it count. A third-team All-American by Phil Steele in 2010, Branche capped his career by breaking the school’s all-time rushing record. He ran for more than 1,300 yards with 13 touchdowns his senior year, capping a career in which he ran for almost 3,700 yards while topping a record that had stood since 1979. To put a stamp on it, he needed 215 yards in the last game of his career at Savannah State to break the all-time mark. He delivered with a career-high 233 yards, getting the final few yards he needed on the very last drive of the game. Like NSU’s 2011 MEAC title, the rushing record was later vacated. But like the championship, at the time it marked a significant accomplishment for the program.

F.) The end of the decade saw NSU break through on the offensive side of the ball. Behind All-MEAC quarterback Juwan Carter, NSU had its highest scoring average since 1995, the highest ever at the D-I level, and the third-highest overall in program history at almost 29 points per game in 2019. Carter threw for more than 2,600 yards, the second-most ever in the D-I era behind Walley in 2011, and was one of a record 13 players to earn All-MEAC honors. Carter finished his third year as a starter and set himself up well for his senior season. With a significant number of skill players back, Carter is on pace to become NSU’s all-time leader passer as a new decade begins.
Read more about NSU’s All-MEAC honorees in 2019.

Those are just but a few of the highlights from football this decade. Be sure to check our Twitter @NSUSpartans to vote for your favorite each and every week. Next week we’ll be back with softball’s greatest storylines.