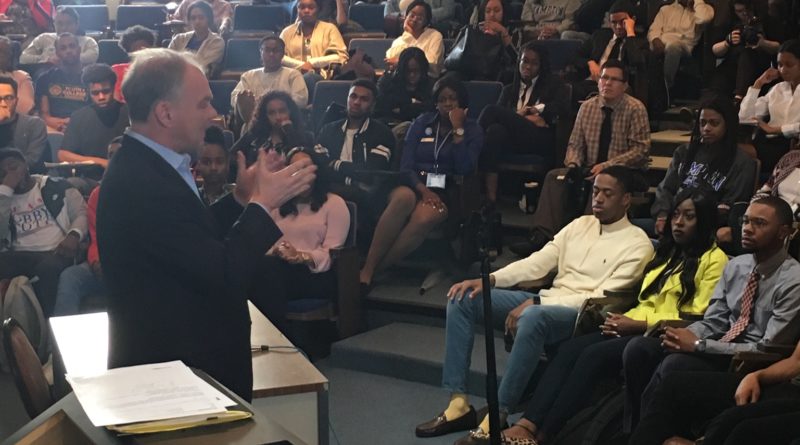 While crisscrossing the state, U.S. Senator Tim Kaine recently made a campaign stop at Hampton University for a “Student Town Hall on Higher Education.” Students filled the auditorium excited to hear from the man who could have been vice-president of the United States. Although the former governor planned to talk about access to higher education and supporting HBCUs, students also voiced their concerns about the teacher shortage that is gripping the nation. As a member of the Health, Education, Labor, and Pensions Committee, Senator Kaine is in a position to work on a solution. Another problem that the senator is anxious to solve is the opioid crisis. Kaine’s mantra, addiction free by 2030, seems lofty but the problem is costing the nation billions of dollars and tens of thousands of lives are being lost to drug overdose. The visit from Senator Kaine comes just weeks before the gala celebrating Hampton University’s 150th anniversary and the 40th anniversary of its president, Dr. William R. Harvey. The gala will take place at the Hampton Roads Convention Center on Saturday, April 28, 2018 from 6 p.m. until 11 p.m. According to the City of Hampton’s website, “The evening will include entertainment, history, and lasting memories, celebrating the institution’s legacy of excellence.” For tickets, sponsorship opportunities and more information, contact Hampton University’s Office of Development at 757-728-4012 or email AnniversaryGala@hamptonu.edu