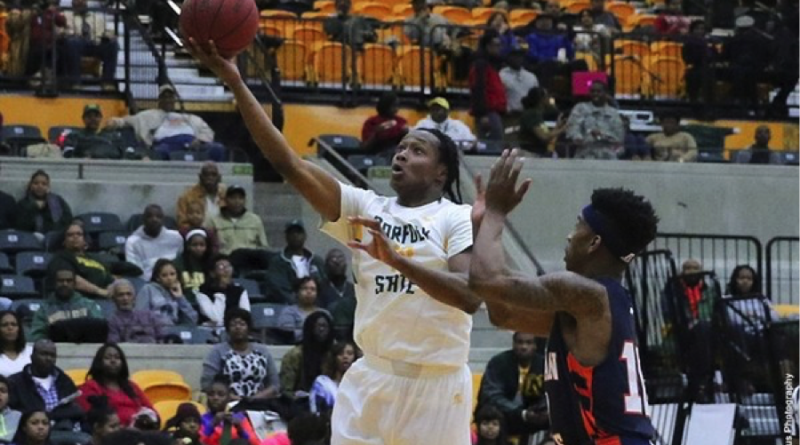 NORFOLK, Va. – The Norfolk State men’s basketball gave a sellout crowd its money’s worth on Thursday night in the Battle of the Bay at Joseph Echols Hall. The Spartans shot better than 60 percent in the second half on the way to an 83-63 win over rival Hampton in the regular season finale.

All 11 players scored for NSU, which held the Pirates to 31 percent shooting and secured the biggest win over Hampton in seven seasons. With the win, the Spartans secured the No. 2 seed in next week’s MEAC tournament. NSU will play on Wednesday at approximately 8:30 p.m. at Norfolk Scope Arena against the winner of the No. 7 North Carolina Central/No. 10 Howard matchup.

The Spartans finished tied for second at 12-4 in the MEAC regular season standings with South Carolina State, also a winner on Thursday night. By virtue of NSU’s win over the Bulldogs earlier this year, the Spartans earned the second seed in the tournament. They also improved their overall record to 16-15 while finishing as the second seed with a 12-4 record for the second straight year.

Thursday marked the sixth straight year the Battle of the Bay was a sellout crowd at Echols Hall. It was marked the first time in nine seasons one team did not sweep in the other in the regular season after Hampton had won the first match this year in late January on its home court.

The Spartans never trailed in the game, although Hampton did get to within one just four minutes into the first half. NSU, though, outscored the Pirates 15-3 to close out the contest.

Hampton dropped to 18-10 overall and 13-3 in the MEAC. The Pirates had already wrapped up the No. 1 seed after their victory on Monday.

The Spartans celebrated Senior Night by shooting 12-of-24 from 3-point range, its best performance since hitting 50 percent from long range against UTEP in December and the most makes since having 14 against Savannah State in January.

Jeff Short led all players with 18 points on 5-of-8 shooting, including a career-high tying five 3-pointers on seven shots in his last game ever at Echols Hall. He also added five assists and three steals. Fellow senior D’Shon Taylor hit 5-of-8 overall, including 3-of-5 from 3-point range, in tallying 15 points and eight boards.

Hampton began to cut into the lead from there, getting to within two at 29-27 on two free throws by Jervon Pressley at the 4:22 mark. The Spartans scored the next eight points of the game and eventually went into the break ahead by nine, 40-31.

The Spartans never led again by nine early in the second stanza thanks to Hampton’s 11-3 run coming out of intermission. A layup by Reginald Johnson finished the run and made it 43-42 in favor of NSU at the 15:51 mark.

The Pirates, though, went nearly four minutes without a field goal. Junior Brian Kelley made a pair of difficult layups to help the Spartans go back up by double digits. Hampton only got as close as six, and a trey from Taylor and a fastbreak dunk by Kelley ignited the closing stretch and the sellout crowd.

Hampton only made one field goal in the last eight minutes of the game, a layup by Trevond Barnes right before the buzzer. The Pirates had missed eight straight attempts before that last-second shot.

The Pirates also controlled the glass, outrebounding NSU 43-31, including 21-6 on the offensive side. Hampton outscored the Spartans 20-7 in second-chance points.

NSU, though, held a 21-11 edge in points off turnovers and a 14-0 advantage in fastbreak points.

Johnson led Hampton with 14 points despite hitting just 3-of-17 from the field. He and Pressley each made 7-of-11 from the free throw line. Pressley had nine points and nine boards, with Lawrence Cooks (13 points) and Dionte Adams (10 points, 10 rebounds) also providing some offense.