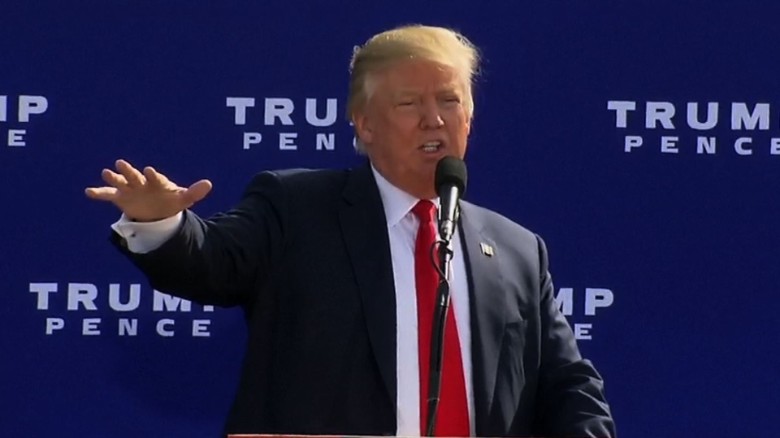 President Donald Trump continues to claim — without any evidence — there was massive voter fraud in the 2016 presidential election.

On Jan. 23, the new president told congressional leaders that between 3 million and 5 million illegal votes caused him to lose the popular vote to Hillary Clinton. Trump won the election with a convincing victory in the Electoral College, even as Clinton won the popular vote by nearly 2.9 million votes.

On Jan. 25, Trump tweeted that he will ask for a “major investigation into VOTER FRAUD.”

I will be asking for a major investigation into VOTER FRAUD, including those registered to vote in two states, those who are illegal and….

even, those registered to vote who are dead (and many for a long time). Depending on results, we will strengthen up voting procedures!

During a press conference on Jan. 24, Press Secretary Sean Spicer was repeatedly asked what evidence Trump had to back up his claims about voter fraud, and Spicer initially responded only that it was based on unidentified “studies and evidence people have presented to him.” Pressed further later in the briefing, Spicer said, “I think there’s been studies. There’s one that came out of Pew in 2008 that showed 14 percent of people who voted were noncitizens. There’s other studies that have been presented to him. It’s a belief he maintains.”

It appears Spicer conflated two different studies, but let’s first address the one by the Pew Charitable Trusts. As we have written before, the 2012 report, “Inaccurate, Costly and Inefficient: Evidence That America’s Voter Registration System Needs an Upgrade,” found that “more than 1.8 million deceased individuals are listed as voters” and that “approximately 2.75 million people have registrations in more than one state.”

The report’s authors said it shows that voter rolls are “susceptible to fraud,” though they did not claim it was evidence of actual fraud. (Indeed, the Guardian reported that senior White House adviser Stephen Bannon was registered in two states.) Rather, Pew said that it is evidence of the need to upgrade voter registration systems.

The primary author of the Pew report confirmed as much in a tweet two months ago:

We found millions of out of date registration records due to people moving or dying, but found no evidence that voter fraud resulted.

In fact, voting experts we talked to pointed to numerous studies that have found such in-person voter fraud — the type of fraud Trump is alleging — is virtually nonexistent. A Government Accountability Office report released in October 2014 said that “no apparent cases of in-person voter impersonation [were] charged by DOJ’s Criminal Division or by U.S. Attorney’s offices anywhere in the United States from 2004 through July 3, 2014.”

The other study, to which Spicer was probably referring (though we could not confirm this with the White House press office), is one written by two Old Dominion University professors and published in the journal Electoral Studies. That study drew upon a national election survey in which some people self-identified as noncitizens, but indicated that they voted.

Extrapolating from that sample, the authors estimated that 6.4 percent of noncitizens voted in 2008 and 2.2 percent of noncitizens voted in 2010. That study was blasted in a rebuttal paper written by a Harvard professor who helps to maintain the voting database. He attributed the results to “measurement error” — noting, for example, that a small number of people had marked in some years that they were noncitizens, but not in other years.

Nonetheless, one of the Old Dominion professors who penned the original study extrapolatednumbers for the 2016 election for us. Jesse Richman assumed the highest rate of noncitizen voting from his study and assumed that 80 percent voted for Clinton — determining that such a rate of fraud would add less than 800,000 votes to Clinton’s total  — not enough to swing the popular vote, as Trump has suggested.

We should also note that on Jan. 24, the bipartisan National Association of Secretaries of State released a statement saying that its members are “not aware of any evidence that supports the voter fraud claims made by President Trump.”

We also note that Trump’s lawyers in December opposed the recount efforts of Green Party candidate Jill Stein on the grounds that there was no voter fraud. “All available evidence suggests that the 2016 general election was not tainted by fraud or mistake,” Trump’s lawyers wrote in filing an official protest with Michigan’s Board of State Canvassers on Dec. 1, 2016.

You can read more detail about our coverage of Trump’s claims about voter fraud, and what the studies actually say, in these stories: