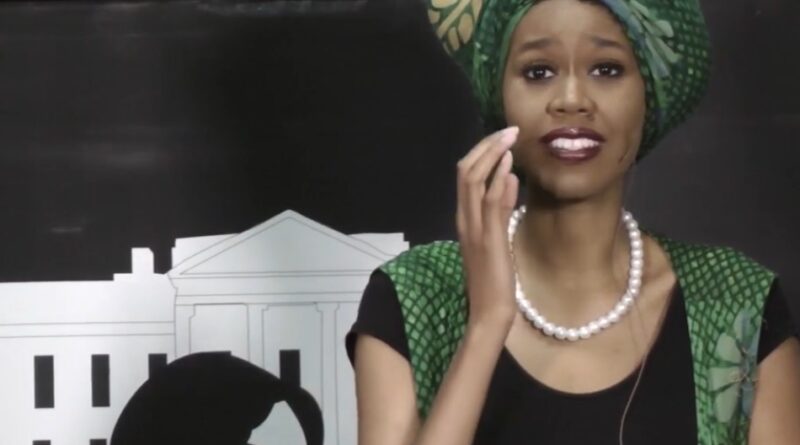 The history of the Africa American woman in this country is one of sadness and triumph. The heights they have reached and the darkness that many had to overcome is often overlooked. Morgan Avery McCoy, in her show From the Slave House to the White House, portrayed in costume 12 African American women, showing their evolution throughout history.

McCoy began with a depiction of an African American woman in Africa, pleading with the White Europeans not to take her from her home land. They brought her to America and called her a slave, selling her because she was their property. They called her a slave long before she called herself one. After this, viewers are taken into the life of a slave nanny, who has to take care of her own slave children, and husband, all the while nursing the master’s children and cleaning his home.

The first famous woman she portrayed was Phyllis Wheatley, who knew how to read and write as a slave. She became famous while she was a slave from her books, however once freed she became very poor because no one was buying her books anymore. She lost several children due to being poor and stressed, and her husband even went to jail.

Another character that McCoy portrayed was Madame CJ Walker, who was the first African American self-made millionaire. She was also a teenage mother, orphaned at 7, married at 14 and widowed at 17. Then came Maggie Lena Walker, who was the first African American President of a bank before women even had the right to vote. She graduated high school at 16 and became a teacher. She had to quit teaching after she got married because of the law, and faced many hardships after her teaching career. Her son killed his own father on accident because he thought that he was a burglar.

McCoy portrayed Bessie Smith, who was an African American female blues singer. Smith knew she wanted to be in show business at a young age, and went on to become well-known for her voice. It wasn’t easy for her being an African American singer, being escorted out of cafeterias that she could pay for. There were times when people would sing along to her music but wouldn’t even shake her hand. Then came Rosa Parks, who wouldn’t give up her seat on the bus to a White man. She helped to start the bus boycott with Dr. King, marching for 381 days to change the bus rules. Eventually, all of her hard work paid off. However, when she and her husband both lost their jobs for fighting for the cause, Rosa Parks had to leave Alabama.

Many are familiar with Martin Luther King Jr. however his wife has a story as well. Coretta Scott King proclaimed that she would be a Queen at a young age. She played multiple instruments as a youth. In college, she was discriminated against which led her to become involved in rallies and boycotts. She met Martin Luther King Jr. in 1953, later becoming his wife and giving him 4 children.

McCoy also portrayed a young civil rights activist who went to Hampton Institute. There, she met a man named John Brown and began dating him. One time, John Brown took her to meet his mother who said she was “too dark” to marry her son. The woman was so scorned by his mother’s words that she went from marching for the people to turning her nose up at her people because she was ashamed. McCoy then transitioned to a young African American girl stuck in the inner city. She wanted to grow up and make something of her life but got pregnant at a young age. She also wanted her children to grow up and make something of themselves but her daughter ended up getting pregnant, making her a grandmother at the young age of 28.

McCoy ended with Michelle Obama and Kamala Harris, both representations of how far we have come as African American woman. Michelle Obama is the wife of Barack Obama, and the first African American first lady of the United States of America. She was born in the inner city of Chicago, growing up in a one-bedroom apartment with her brother, mother, and father. She went from the hoods of Chicago to being the first lady, a best-selling author, and having her own Netflix show.

Kamala Harris made history this past November by becoming the first female, African American and Asian American Vice President of the United States. “I had to include her in the play so that young girls can see what is possible” McCoy stated. These amazing women are proof of how far we have come and how much further we are going to go. McCoy’s play was heartwarming and very much appropriate with today being Juneteenth. Happy Juneteenth!