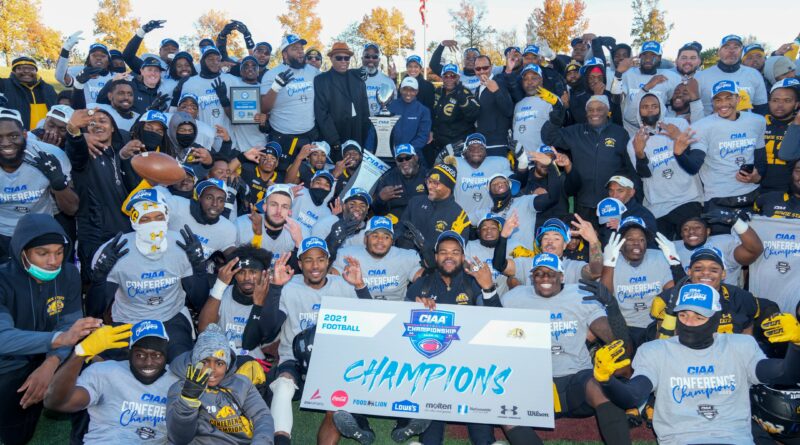 SALEM, VA – Bowie State tangled with Fayetteville State for the third straight time in the CIAA Championship game, and the Bulldogs emerged as victors once again.

The contest was much closer this time than the previous two matchups, but the Bulldogs relied on the running of Calil Wilkins and its nationally ranked defense for a 17-7 victory at Salem Football Field on Saturday, Nov. 13.

The Bulldogs improved to 10-1 in winning their third consecutive CIAA crown. Today’s victory should’ve also solidified their No. 2 ranking in the Super Region Two as they now await their opponent in the NCAA Division II playoffs. The Broncos, 8-2 overall, were making their fourth straight appearance in the CIAA Championship Game.

Wilkins, named Food Lion Game MVP, toted the ball 25 times for 163 yards to spark the Bulldogs’ offense, which jumped out to a 14-0 lead in the first quarter. The defense took over from there, stopping the Broncos at its 1-yard line on a failed fake field goal attempt in the first quarter and forcing a short field goal which FSU missed in the third quarter.

The biggest defensive play occurred early in the fourth quarter and the Bulldogs holding a 14-7 lead. Ke’Monta Stockdale caught a pass from K’hari Lane and rumbled downfield 37 yards in Bowie State territory. Stockdale shrugged off one defender and nearly broke out the arms of Bowie State’s Myles Wolfork, who knocked the ball loose as teammate Tevin Singleton scooped it up.

Fayetteville State thought Stockdale was down before he fumbled, which would nullify the turnover and give FSU first-and-10 in Bowie State’s territory. After watching instant replay, the officials ruled the play a fumble and Bowie State took over on its 32-yard line.

After Alen Omerhodzic’s 33-yard field goal pushed the lead to 17-7, the Bulldogs’ Kendel Robinson fell on a fumble forced by Joseph Murray with under two minutes left to put the game away.

Wolfolk, a defensive back, led the Bulldogs’ defense with 11 tackles in addition to forcing the critical fumble in the second half. Defensive lineman Jonathan Ross had 10 tackles and linebacker Wesley Bowers added nine.

Ja’rome Johnson tossed two touchdown passes – one to Quron Winder for 10 yards and one to Victor Olayinka for nine yards – on the Bulldogs’ first three possessions of the game for the early lead.

But the Broncos defensive stiffened. Led by Food Lion Runner-up Game MVP Keyshawn James, FSU did not allow another touchdown. James, a defensive end who was the CIAA Defensive Player of the Year, led the charge with eight tackles including 2.5 tackles for loss.

Unfortunately for the Broncos, the BSU defense was up for the challenge as well. Other than giving up a 26-yard scoring pass from Lane to Braxton Knotts, the Bulldogs contained the Broncos’ high-powered offense.

Fayetteville State and Bowie State are two and three, respectively, among Division II teams nationally in total defense. Neither team gained 300 yards of offense. They both committed two turnovers.

In the end, Bowie State had enough offense – mainly Wilkins – to wrap up its third consecutive conference title.