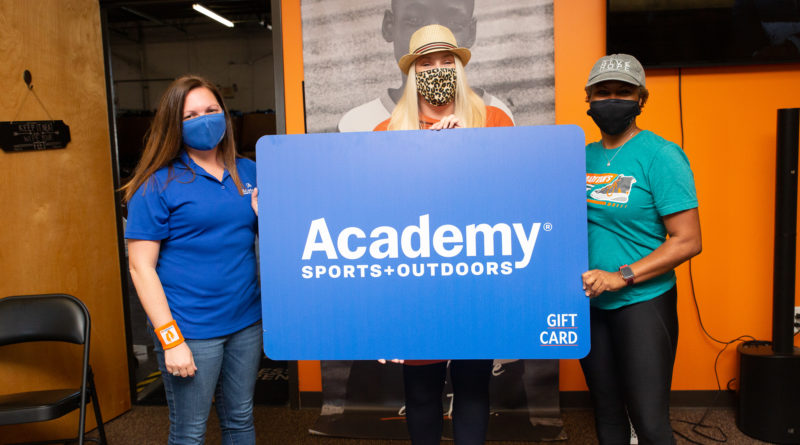 CHARLOTTE, NC – The Central Intercollegiate Athletic Association (CIAA) and Academy Sports + Outdoors have collaborated to make this Thanksgiving holiday a little brighter for Samaritan’s Feet. In the spirit of giving during this holiday season, the CIAA surprised Manny and Tracie Ohonme, Co-Founders of Samaritan’s Feet, with a $5,000 gift card from Academy Sports + Outdoors to use at its area stores.

The presentation took place at the Samaritan’s Feet warehouse in Charlotte during a previously scheduled volunteer event with members of the CIAA staff, including Commissioner Jacqie McWilliams. Academy Sports + Outdoors Senior Regional Marketing Specialist Liza Barrett joined the CIAA team to present this surprise gift to the Samaritan’s Feet staff.

The CIAA has been a community partner with Samaritan’s Feet for several years, supporting Shoes of Hope distributions throughout the greater Charlotte region and abroad. CIAA staff members, student-athletes, coaches, and administrators have also volunteered time and resources in helping support the Samaritan’s Feet mission.

“From idea to execution, Academy Sports + Outdoor made this happen with less than 72 hours’ notice. We are blessed to partner with an organization that is committed to giving back in the communities they serve.  The CIAA is excited to be able to present this gift to Samaritan’s Feet as they continue their mission to serve one million people in 2020.”

Samaritan’s Feet strives to serve one million people in 2020 as part of their Million Shoes campaign. So far in 2020, Samaritan’s Feet has distributed over 500,000 pairs of shoes across the United States and around the world.

Last month, the CIAA and Academy Sports + Outdoors announced its multi-year partnership that will focus on establishing meaningful community initiatives across established markets within the CIAA footprint. Specifically, these initiatives will look to activate and amplify grassroots efforts, such as youth outreach and mentoring programs, that is inclusive of students-athletes and administrators from across the conference.

Founded in 1912, the Central Intercollegiate Athletic Association (CIAA) is the first and longest running, African American athletic conference in the U.S. and one of the most recognized conferences in Division II. The CIAA conducts 14 championships attended by more than 150,000 fans from around the country. In 2020, the conference celebrated the special 75th anniversary of its Championship Basketball Tournament – an event that has become a must-see in the African American community. The Basketball Tournament has been honored as a Champion of Economic Impact in Sports Tourism by Sports Destination Management, the leading publication with the largest circulation of sports event planners and tournament directors in the sports tourism market, for both 2018 and 2019. Headquartered in Charlotte, North Carolina, the CIAA is governed by the Presidents and Chancellors of its 12 member-institutions: Bowie State University, Claflin University, Elizabeth City State University, Fayetteville State University, Johnson C. Smith University, Lincoln University of Pennsylvania, Livingstone College, Saint Augustine’s University, Shaw University, Virginia State University, Virginia Union University, and Winston-Salem State University. Chowan University is an associate member in football and women’s bowling.  For more information on the CIAA, visit theciaa.com, like us on Facebook and follow us on Twitter and Instagram.

Academy is one of the leading full-line sporting goods and outdoor recreation retailers in the United States. Originally founded in 1938 as a family business in Texas, Academy has grown to 259 stores across 16 contiguous states, primarily in the southern United States. Academy’s mission is to provide “Fun for All” and Academy fulfills this mission with a localized merchandising strategy and value proposition that strongly connects with a broad range of consumers. Academy’s product assortment focuses on key categories of outdoor, apparel, footwear and sports & recreation through both leading national brands and a portfolio of 17 private label brands, which go well beyond traditional sporting goods and apparel offerings.

Samaritan’s Feet is a 501(c)(3) humanitarian aid organization that serves and inspires hope in children by providing shoes as the foundation to a spiritual and healthy life resulting in the advancement of education and economic opportunities. Over 1.5 billion people are infected with diseases that are transmitted through contaminated soil (World Health Organization, 2017). The goal of Samaritan’s Feet is to create a world with zero shoeless children. Since its founding by Manny and Tracie Ohonme in 2003, Samaritan’s Feet and its partners have served more than 7.5 million people in 108 nations and 435 U.S. cities. For more information about Samaritan’s Feet International, visit www.SamaritansFeet.org.