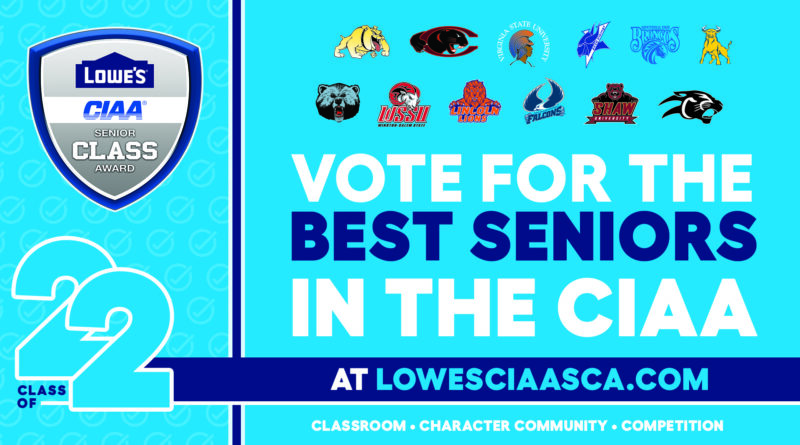 Fan voting for the 2021-22 Lowe’s CIAA Senior CLASS Award candidates is now open. Fans are encouraged to visit www.lowesciaasca.com to vote for their favorites among the 24 candidates from now through February 10, 2022. At the end of the voting period, fan votes will be combined with those of CIAA coaches and media to determine award winners.

An acronym for Celebrating Loyalty and Achievement for Staying in School ®, the Lowe’s CIAA Senior CLASS Award focuses on the total student-athlete and encourages players to use their platform in athletics to make a positive impact as leaders in their communities.?To be eligible for the award, a student-athlete must be classified as a senior and have notable achievements in four areas of excellence: community, classroom, character and competition.

The Lowe’s CIAA Senior CLASS Award candidates were nominated by their respective universities. Of the 24 student-athletes, all are in excellent academic standing at their universities and volunteer his or her time with charitable organizations and causes while upholding a reputation for positive character on campus and in the community.

Following the voting period, the male and female winner will be announced during the CIAA Tournament in Baltimore, Maryland and presented with the prestigious Senior CLASS Award trophy at the championship games on Saturday, February 26.