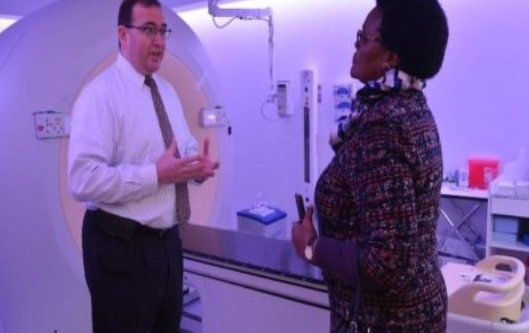 “With the addition of this state-of-the-art technology, HUPTI can continue to ease human misery and save the lives of cancer patients. This is our mission at the world’s only free-standing proton beam cancer treatment center,” said Hampton University President, Dr. William R. Harvey.

The addition of an on-site MRI machine will be a big boost to the facility, as it will eliminate the need to outsource imaging to other locations. “This is a big win for Hampton University and HUPTI as well as a major progression for our patients’ care,” said Dr. Vahagn Nazaryan, HUPTI’s Executive Director. “Positive developments such as this one allow for expedited patient treatments and previously inaccessible research opportunities.”

The approval for a new MRI machine is one of the many notable achievements and milestones for the Institute over the last several months. In March of this year, HUPTI surpassed 3,000 patients treated since its inception in 2010. Hampton University also became a Member of the National Cancer Institute’s Quantitative Imaging Network (QIN), and secured a $2 million contract for cancer imaging research from the Commonwealth of Virginia Department of Health to assist in further developing research resources at HUPTI to support various health-centered projects, one of which included MRI imaging capability at the facility.

Also of note, in April, Dr. Nomonde Nolutshungo, the Minister Counsellor (Health Attaché) for the Republic of South Africa, toured HUPTI. She met with Hampton Mayor Donnie Tuck and the Institute’s medical staff to discuss ways to make the proton therapy cancer treatment modality available to the residents of South Africa. In the country of 58 million people, over 100,000 citizens disproportionately suffer from prostate, breast, lung, colorectal and other cancers. Following Dr. Nolutshungo’s visit, subsequent meetings with HUPTI staff are being scheduled to decide what next steps can be taken to help the people of South Africa gain access to proton therapy.