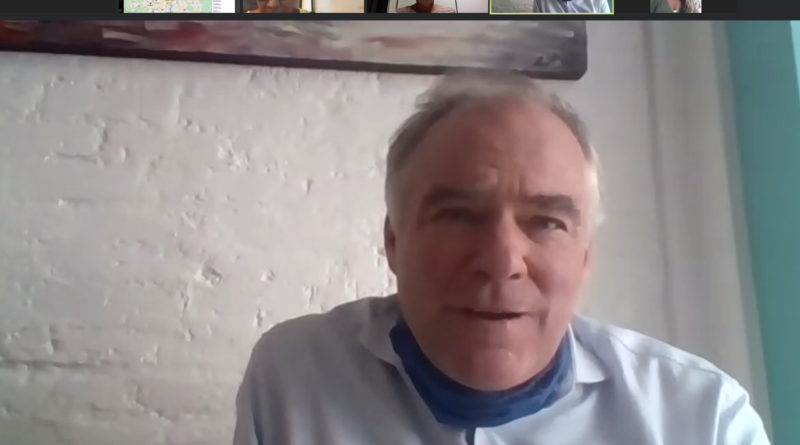 Due to an increase in mail from constituents, on Friday, September 4, U.S. Senator Tim Kaine held a virtual discussion with several of the people who wrote to his office to express their dismay with the United States Postal Service. Most of the postal patrons spoke about not receiving their mail in the amount of time in which they have become accustomed. Represented on the call were residents from various locations throughout the state including the Hampton Roads cities of Newport News, Chesapeake and Virginia Beach.

One woman, who said she was familiar with tracking packages because she previously sent packages through eBay quite a bit, saw that her package had actually backtracked, going from Sterling to Dulles to Baltimore and then back to Dulles before arriving at her mom’s home in Baltimore. According to her calculations, the package took three days and 14 scans to reach its destination, which is about 45 miles from her home, in Virginia.

Betsy Zeigler, of Newport News, stated that the post office lost a couple of her bills in the mail and she had to pay over $40 in late fees and interest. Senator Kaine pointed out that this is a double problem because with the slow down in service, bills are arriving to customers later than usual and when the customer sends their payment, it takes extra time to arrive at its destination, as well.

Lorraine Piepkorn, who lives in Virginia Beach, is a military wife. She said that she has relied on the post office for 23 years to keep her children connected to her husband, while he was deployed.  The children would send photos of crafts that they made. “The post office affected my life in a tangible way,” Piepkorn said.

Piepkorn’s father is now ill and is “literally on his deathbed,” she stated. Previously, it took 2-3 days for her father to receive mail sent by her. Now, it takes “double or triple” that amount of time, Piepkorn remarked.

Another person on the call said she ships packages for her business by USPS. Her customers are not receiving their orders and it reflects poorly on her business.

Jerome Johnson was in the United States Marine Corps and had surgery that required him to take medicine. His prescriptions previously arrived in 2-3 days from the time he ordered them. Now, it takes 3 weeks for his medicines to arrive from Richmond.

When asked about accountability, Kaine stated, “We are not going to just accept this and say it is the new normal.” He went on to say that legislation should be introduced to make the postmaster general position senate confirmable.

In light of all of the accounts from his constituents about mail delays, Kaine recommends that people vote early. If there is a problem with a ballot, there will be enough time to correct it. Voters can also deliver their ballots by hand to the registrar’s office or vote in person on election day, Tuesday, November 3.