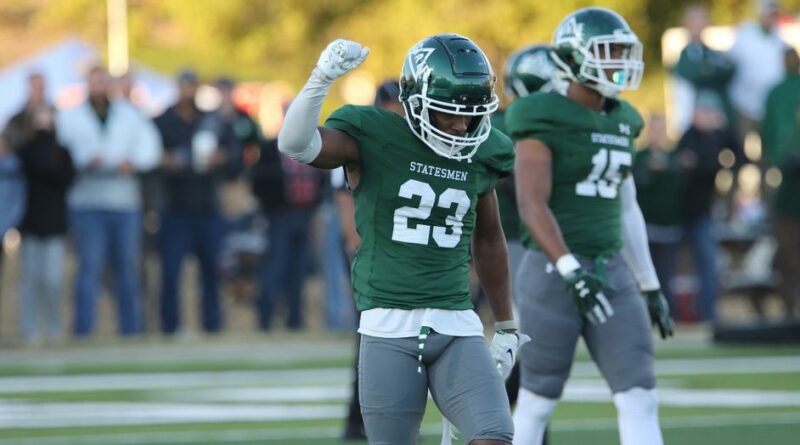 Delta State 51, Fayetteville State 0
Champion Fayetteville State apparently used up all its energy winning the CIAA title and had nothing left in falling to No. 2 seed Delta State, 51-0 in a first round Div. II playoff game.
Delta State (11-1) scored 28 points off of the five Bronco turnovers and managed to score on offense, defense, and special teams in the win. The Statesmen scored on a blocked punt and a fumble return while building the lead to 21-0 after one quarter and 38-0 at the half. They finished with 407 total yards while holding the Broncos (9-3) to 250 yards.
“We took a tough loss today, but it doesn’t diminish what this team has accomplished this year,” said Head Coach Richard Hayes Jr. “I am really proud of them. We ran into a buzz saw today and [suffered] a lot of injuries. The guys fought hard and I am really proud of that.” Mekhi Fenner led all FSU rushers with 43 yards in the contest, picking up 4.3 yards per carry. QB Caden Davis also added 32 yards on the ground, averaging 4.6 yards per carry.
The most prolific target for the Fayetteville State quarterbacks was
Cameron Harrington, who caught five passes for 49 yards. His longest
haul was for 22 yards. Cameron Merrell led the Fayetteville State defense, recording 11 tackles, one tackle for a loss of three yards and a sack for the same. Kentrell Caldwell finished with eight tackles and one interception with a return of 13 yards.

Wingate 32, Virginia Union 7
Virginia Union could not get out of its own way in falling to Wingate 32-7 in a first round Div. II playoff game in Richmond, Va.
The Panthers (9-2) gave up two interception returns for touchdowns in the second quarter to trail 20-0 at the half and began the third quarter by giving up a safety. Down 29-0, they scored their only touch￾down on a 48-yard reverse pass from QB Jahkari Grant to John Jiles covering 48 yards. Jiles finished with 86 yards on six receptions.
Running back Jada Byers ran 21 times for 119 yards to set a new CIAA rushing mark by finishing the season with 1,920 yards. The sophomore eclipsed the CIAA record of 1,889 previously held by Richard Huntley of Winston-Salem State. Shamar Graham led the defensive effort with 14 tackles, eight solos. The loss gave VUU a final 2022 record of 9-2, the most wins for a Union football team since 2007.
“I want to get this team used to being here,” said VUU Head Football Coach Dr. Alvin Parker. “We could have made some plays here or there, but I think just understanding the whole world of the playoffs