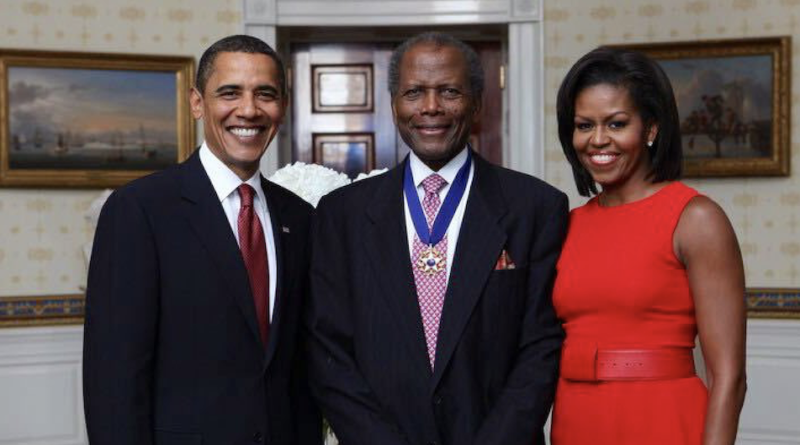 The Bahamian-American actor, activist, ambassador, and film director, Sidney Poitier, died on January 6, at the age of 94. Poitier at his home in Los Angeles, California. He was instrumental in paving the way for African American actors and made history by becoming the first African-American to win an Academy Award in 1964 for Best Actor for his role in the film “Lillies Of The Field.”

President Barack Obama said on Twitter “Through his groundbreaking roles and singular talent, Sidney Poitier epitomized dignity and grace, revealing the power of movies to bring us closer together. He also opened doors for a generation of actors. Michelle and I send our love to his family and legion of fans.”

Upon learning about the passing of Sidney Poitier the following statement was released by Congressman Kweisi Mfume:

“Sidney Poitier was a trailblazing actor, director and activist who paved the way for countless people across the globe. His leadership and commitment inspired millions to strive for a better country where Black people could play leading roles in every aspect of American life. He was awarded the Presidential Medal of Freedom and Knight Commander of the British Empire because of his commitment to showcase Black excellence on-screen and in real life. He also won two Golden Globe awards, a Grammy award, and was the first Black man to win an Oscar award for his performances. We all stand on the shoulders of this social justice luminary. Rest in peace, Mr. Poitier,” said Kweisi Mfume.

President Joe Biden said in a statement released today, “Jill and I were saddened to learn of the passing of Sidney Poitier, the once-in-a-generation actor and advocate whose work carried so much dignity, power, and grace that it changed the world on and off the big screen.

Sidney was more than just one of the finest actors in our history.  His iconic performances in films like The Defiant Ones, A Raisin in the Sun, Guess Who’s Coming to Dinner, and In the Heat of the Night held a mirror up to America’s racial attitudes in the 1950s and 1960s.  With unflinching grandeur and poise — his singular warmth, depth, and stature on-screen — Sidney helped open the hearts of millions and changed the way America saw itself.

The son of tomato farmers in the Bahamas, Sidney became the first Black man to win the Academy Award for Best Actor — but the trail he blazed extended leaps and bounds beyond his background or profession.  He blazed a path for our Nation to follow, and a legacy that touches every part of our society today.

Jill and I send our love and prayers to Sidney’s wife, Joanna, his daughters, and his grandchildren and great-grandchildren. May God bless Sidney Poitier.”

Poitier leaves to mourn his wife Joanna Shimkus, who he married in 1976.