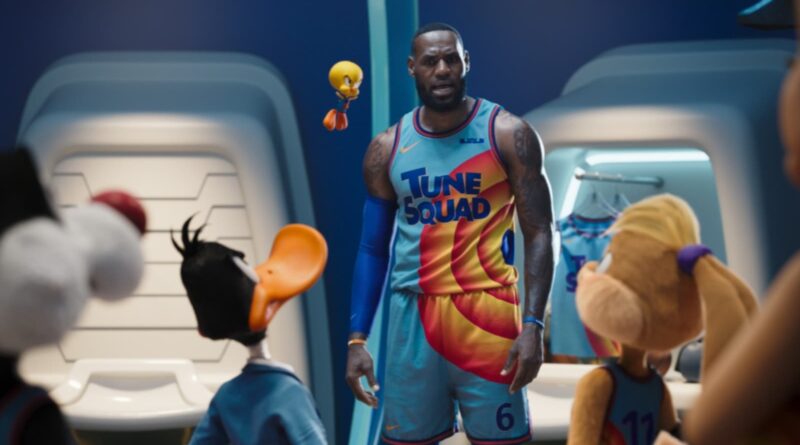 Space Jam: A New Legacy is in the running for the most unnecessary sequels ever made. It’s difficult to be too hard on a kids movie that has enough eye-popping visuals and background Warner Brothers character cameos to keep your attention through the entirety of its runtime.

Anyone going into this movie probably knows exactly what they are getting themselves into. This is essentially a shameless cash grab and celebrity-athlete praise vehicle that is a sequel to a shameless cash grab and celebrity-athlete praise vehicle, and I’d have to say it’s a slight step-down from the original. The film takes a while to pick up steam, the beginning being a little hard to watch with the sub-par acting on display by King James and jokes that land about on target as a Shaq free throw. Though the first quarter of the new Space Jam feels messy and flat, it does eventually find a sweet spot.

Don Cheadle plays the villain, an AI computer program meant to create new business ideas for Warner Brothers. It’s kind of ironic a movie produced by an evil corporation blatantly telling us they are the evil corporation. What’s next, a Mickey Mouse movie where they have to fight the big wigs at Disney in a match of golf? Don Cheadle’s character Al G Rhythm, is the catalyst for the big game, as he’s an AI stuck in a computer that is basically driven by the want to become real and understood as any sentient being trapped within the confines of its creation would.

The setup of the plot is contrived, yet it’s effective in streamlining the movie to what is most important: finding the Looney Tunes and getting the game started. There’s a montage of gathering the Tunes from the different worlds found throughout the “Serververse”, and in that montage, we get a hodgepodge of bankable characters and worlds from all throughout popular culture. Que in a few jokes here and there of Bugs Bunny saying “haven’t we done this before?” and you have an effective if not tiresome lead-up to them finally playing some basketball – if you can really call it that.

The thing people really come for in this movie is the crazy antics that happen during the game, the audience of which being a slew of characters owned by Warner Bros, which is definitely a fun time to point out which ones you recognize. That scene alone might be worth watching again as it’s impossible to catch every cameo in what looks like thousands of colorful onlookers. Not only that but the humor in the film expands exponentially once the game starts, making you wish they had gotten to this point in the movie much sooner. There were moments I found myself laughing out loud at the sheer ridiculousness of the Looney Tunes even though it was a lot of the same jokes and slapstick they’ve been known for decades.

By the end, I feel I got exactly what I came for, and had fun along the way. Yes, the new Space Jam had no business happening, but what’s throwing away an hour and a half to watch these zany characters do what they do best one more time?