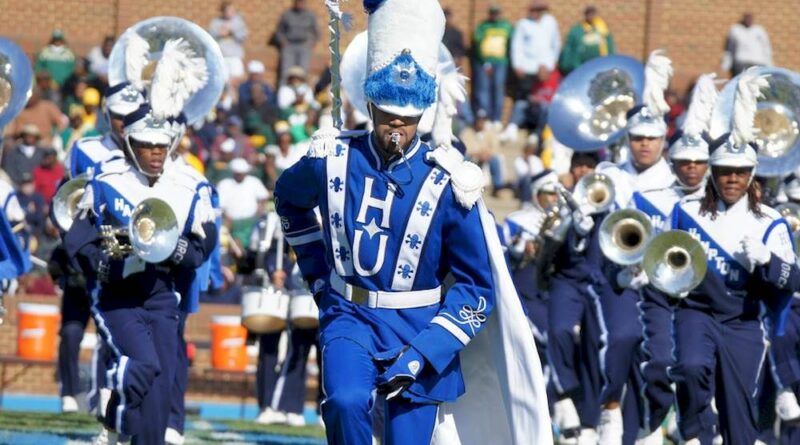 The Hampton University Marching Force will perform in a spectacle like no other when the Macy’s Thanksgiving Day Parade® returns this Thanksgiving to usher in the start of the holiday season as performers from across the country take to the streets of New York City. On Thursday, November 25 at 9:00 A.M., the 95th march of the world-famous Parade of Magic will bring the nation together in celebration featuring Macy’s signature mix of giant character helium balloons, fantastic floats, incredible marching bands, jubilant performance groups, whimsical clowns, music stars and the one-and-only Santa Claus.

“For more than nine decades, the Macy’s Thanksgiving Day Parade has brought joy to millions who gather with friends and family to experience this one-of-a-kind holiday celebration along the streets of New York City and in homes nationwide,” said Will Coss, Executive Producer of Macy’s Thanksgiving Day Parade. “For our 95th celebration, Macy’s has created a spectacle to remember, featuring a dazzling array of high-flying balloons, animated floats and incredible performers. We can’t wait to help New York City and the nation kick-off the holiday season with the return of this cherished tradition.”

Each year, the Macy’s Parade Band Committee looks for bands that have the stage presence, as well as musical and marching abilities, to captivate millions of spectators in New York City and across the country. Hampton was selected from more than 100 applicants as one of nine selected bands to march in the 94th edition of the annual holiday spectacle. Unfortunately, that invitation was deferred to 2021 due to the COVID-19 pandemic. This will mark the first Parade appearance by the Marching Force, which will also represent the state of Virginia.

“Rooted in tradition and with explosive energy, the Hampton University Marching Force delivers outstanding, entertaining shows that time and time again bring the crowd to their feet,” said Wesley Whatley, creative producer Macy’s Thanksgiving Day Parade. “We look forward to introducing the talented students of Hampton University to our Parade audience for the band’s debut in the 2021 Macy’s Thanksgiving Day Parade!”

“‘The Marching Forceis an elite group of talented, young musicians and dancers who are academically accomplished. This opportunity will allow Hampton University to once again shine on the world-wide stage in front of the millions in attendance and others watching from across the globe,” said Hampton University President, Dr. William R. Harvey.  “Under the direction of Dr. Thomas Jones, The Marching Forcecontinues to uphold THE Standard of Excellence as being one of the best marching bands in the nation.”

The Hampton University Marching Force has spent a significant amount of time planning for its Parade appearance. In addition to rehearsing, they have hosted creative fundraising events that not only brought the school and the community closer, but also prepared the students for the march of a lifetime.

For more than ninety years, Macy’s Thanksgiving Day Parade has given thanks to what Macy’s values most –- its loyal fans. More than 5,000 Macy’s employees and dedicated volunteers work tirelessly to create a spectacular event that entertains the cheerful crowds and provides joy to millions at home watching on Thanksgiving Day.  Stretching down a more than two-mile-long route in New York City, the spectacle is alive with gleaming color, music and smiles.

“In a normal year, preparing a band for the Macy’s Parade is stressful and daunting. To do so in the midst of a global pandemic—the challenge is insurmountable. Despite that, we are prepared to not only meet that challenge head-on, but to also excel and make our Hampton University family proud. It is a testament to the hard work of our students and staff, through the support of our fellow faculty and administrators under Dr. Harvey’s unwavering leadership and commitment to excellence,” said Hampton University Director of Bands, Dr. Thomas Jones.

Pepsi Stronger Together – the Brand’s series of grassroots initiatives bringing tailored programming support to communities across the country – is helping to bring Hampton University’s award-winning band to NYC to perform in the annual Macy’s Thanksgiving Day Parade. Through a $100,000 donation, Pepsi Stronger Together is providing transportation to and from NYC and practice uniforms for the band.

“I’m so excited Pepsi Stronger Together was able to help make this journey happen for the incredibly talented Hampton Marching Force as they head to perform at this iconic stage,” said Derek Lewis, President, South Division, PepsiCo Beverages North America (PBNA). “From our ‘She Got Now’ internship program to other HBCU-specific donations, and as a Hampton alum myself, I’m so proud to see another piece of PepsiCo’s commitment to supporting HBCUs come to life.”

For spectators wishing to enjoy the spectacle live, the 95th Macy’s Thanksgiving Day Parade begins at 9:00 A.M., kicking off from its traditional starting line at 77th Street and Central Park West. From there the procession will march down its signature 2.5-mile route from Central Park West to Columbus Circle, turning onto Central Park South and then marching down 6th Avenue/Avenue of the Americas. At 34th Street, the Parade will make its final turn west and end at 7th Avenue in front of Macy’s Herald Square.

Public viewing will be set up along designated portions of the route and managed by the NYPD. Spectators should avoid bringing large bags, umbrellas, backpacks and strollers. The public entering viewing streets may be subject to a security search. For additional viewing information, please visit macys.com/parade.

For decades, the Macy’s Thanksgiving Day Parade has been one of the nation’s most anticipated and watched holiday celebrations. Viewers nationwide can catch all the action via the special broadcasts on NBC and Telemundo from 9:00 A.M. to 12:00 P.M. in all time zones. For the first time, fans can also stream the broadcast on Peacock. The TODAY Show’s Savannah Guthrie, Hoda Kotb and Al Roker will host the three-hour telecast for NBC and Peacock. The Spanish language simulcast on Telemundo will be hosted by Ana Jurka and Carlos Adyan, accompanied by Freddy Lomelí reporting live from Sixth Avenue. It will also feature a special appearance by Miss Universe® Andrea Meza.