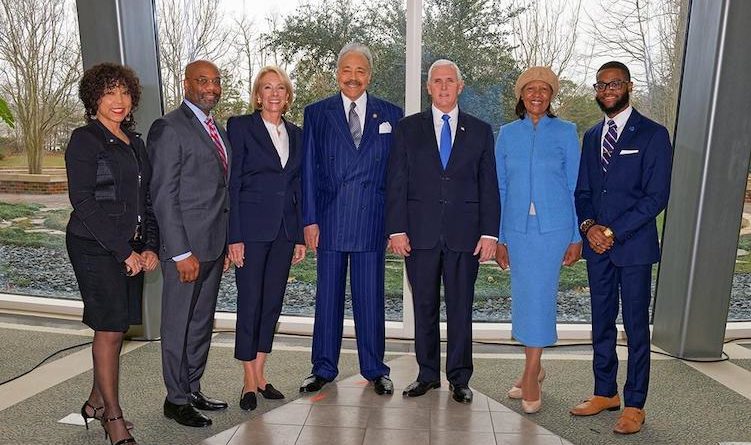 “It was an honor for Hampton University to host the Vice President of the United States, Mike Pence and U.S. Secretary of Education, Betsy DeVos at the Hampton University Proton Beam Cancer Treatment Institute,” said Dr. William R. Harvey, Hampton University President. “This life saving treatment and research center is seeing an average of 50 patients per day while easing human misery and saving lives.”

During the discussion, the Vice President spoke about what an honor it was to be able to meet with the wonderful team and students of Hampton University. “Hampton University is an extraordinary institution. You have been making history and making a difference as a historically black college in this country,” Pence said. “Hampton University and the Proton Therapy Institute are just an incredible asset for Virginia and for the United States of America. This is an educational institution of a tremendous reputation.”

Vice President Pence also complimented Dr. Harvey on his role regarding federal funding for HBCUs. “Dr. Harvey, you played a leading role when the President of the United States signed a measure to make federal funding for HBCUs permanent in this country. And the increases, the investment, all are a reflection of the quality of education, and the importance of this educational tradition in our country,” Pence said.

Lastly, Vice President Pence spoke on HUPTI and all it has done in the last 10 years. “It’s remarkable to think about the thousands of patients who have come in here, some of whom I met today, who have literally received lifesaving innovative proton treatment for cancer. And it was scarcely 10 years ago, Dr. Harvey, that this was a brainchild of yours and of Hampton University. Thanks to your leadership and the generosity of people around the country and the excellent team you have here, you’re really changing lives. I’m looking forward to hearing more about how we can be helpful and support not only the mission of Hampton University, but specifically the Proton Therapy Institute,” Pence said.

“[The current administration has] increased HBCU funding by 17% in real dollars…and restored Pell Grants to being year-round,” Pence said. “The Department of Education also provided more than $500 million in loans for capital funding.”

DeVos also mentioned a new addition to the recent budget proposal, in which there is a “stern initiative for HBCUs located in opportunity zones.”

“We were delighted to have Vice President Mike Pence and Secretary of Education Betsy DeVos visit our facility today. It is extremely gratifying to receive recognition for the unique research capabilities and life-saving treatment our University and staff are providing,” said Dr. Vahagn Nazaryan, HUPTI Executive Director.

Jonathan Mack was there to represent Hampton University students. “I’m here today to represent the student body in talking to Vice President Mike Pence, and also to provide a student perspective, not just from the Hampton student, but all HBCUs,” Mack said. “Meeting with Vice President Pence as well as Sec. DeVos was a once in a lifetime opportunity…I am thankful to Dr. Harvey as well as everyone else instrumental in allowing us this opportunity to engage in this dialogue.”